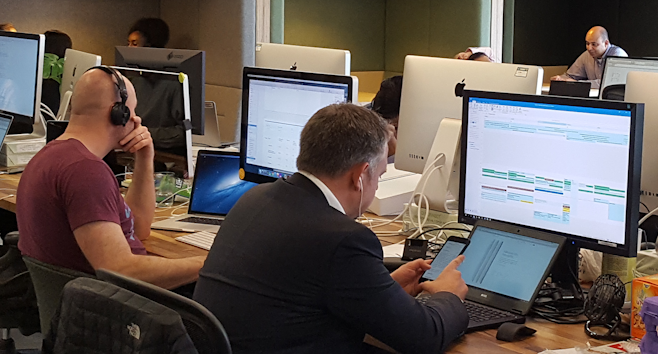 SDLC Board Member Jonathan Smart from Barclays was interviewed about his role in changing how work is done at Barclays. The following article was published on Jan 04, 2018. Jonathan has discussed and refined these topics as part of the SDLC over the past two years.

As Head of Ways of Working at Barclays, Jonathan Smart finds ways to help the bank achieve “better, faster, safer, happier” outcomes. He discusses how adopting an ‘agile’ approach empowers teams and encourages flexibility – and how a US Navy Commander inspired him to redefine leadership.

How we judge outcomes

Better: We’re looking at quality. There are many metrics around this, for example in technology it could be number of incidents in production.

Faster: We’re measuring lead-times. For product development, it’s all about learning and fast feedback loops, and we really want to eliminate waste and reduce the time to feedback from a customer on it.

Safer: We’re focused on speed and control, but we have to have control first and speed second in our regulated industry.

Happier: We’re looking at colleague happiness, and customer happiness. For colleagues, we have a regular survey, with scores going up. For customers, we’ve seen excellent scores from teams who measure customer Net Promoter Score.

David Marquet was the Commander of a US Navy submarine. Put in charge of the worst performing vessel in the fleet, he realised that his team needed to work very differently to turn things around. “Leadership,” he said, “should mean giving control rather than taking control, and creating leaders rather than forging followers.”

Within 12 months, Marquet’s submarine went from being the worst to the best performing in the Navy, and in that year he didn’t issue a single command. Locked up for six months at a time with 130 people, he created a culture where the people working on the submarine said: “I intend to do this, and I’ve checked these things”, and he would reply: “Did you check that?” or: “Well, go ahead”, but he would do it without forcing orders. Each member of the team was aware of the mission, became engaged by assuming responsibility, and they also developed new expertise. It’s a big mindset shift, and it requires a new perspective at all levels – from leadership, middle management, and the teams doing the work.

At Barclays, I lead a small central team, part of the Group CTO team, focussed on how we ‘do change’. There are traditional ways of working and approaching change, and there are modern ways. My role is leading across Barclays through influence and through helping the organisation achieve better outcomes through modern ways of working.

The scope of what we’re doing goes across the whole of Barclays’ business. Our focus on modern ways of working, at a company that is 327 years old and was not ‘born agile’, includes HR, legal, sourcing, real estate, audit – all parts of the firm.

It isn’t always easy enacting change in such a large organisation. Part of our role is sitting in the centre and acting as a ‘centre of enablement’, tackling organisational impediments that otherwise would not be addressed. We also use a ‘champion network’, so within an intentionally federated model there are ‘champions’ for better ways of working through the business. And that gives almost unlimited scalability, because there are point people for the investment bank, for the retail bank, for Barclaycard, and so on. They have the same pattern with further subdivisions and champions.

There are various principles we look to apply – ‘agile’, ‘lean’, ‘design thinking’ and others – but our eye is primarily on the outcomes. Our goal is not agile for agile’s sake. We’re here to help teams deliver better business outcomes using tools such as agile. Those outcomes are summed up as “Better Value Faster Safer Happier.”

Agile – an efficient, iterative way of working – came about through technology and has grown through software development. However, firms have realised now that the agile mindset doesn’t only apply to technology. In fact, it absolutely needs to not only apply to technology, because if you do that it ends up being a local optimisation, where you’re improving only one part of what is involved in delivering change.

So, for example, our Internal Audit department has adopted an agile way of working. Previously, auditors would have been working on multiple audits at the same time, so there would have been a lot of context switching and the flow efficiency would have been far from ideal.

If you look at the percentage of time that work is being worked on against the percentage of time that work is waiting, for most large firms work is waiting 85 to 90% of the time. This comes about through context switching and doing too much. As with cars on a motorway – when you put more cars on a motorway, they go slower until at some point they stop. Historically there’s been a focus on the workers rather than the work and getting people 100% utilised, but the system can grind to a halt and that is where the waste can be.

So, that’s where the waste is in large companies – where the work is waiting. But now Internal Audit has less work in progress, less work in parallel, and flow efficiency has improved. It’s counterintuitive – you need to limit your work in progress and do less, and you end up doing a whole lot more. By adopting this way of working, Internal Audit has a shorter lead time, faster feedback and finish things before they start something else. They’ve shaved a third off the time they take to complete an audit and are aiming to double those gains.

It’s a big mindset shift, and leadership plays a huge role in this. Empower the team, give them the mission, and allow them to work out how to achieve it. And this is where colleague engagement shoots up: instead of being command and control with role specialisation, you work it out in the multi-disciplinary team. Instead of it being an assembly line – a model from the first industrial revolution with people organised by role and never speaking to the customer – you get to understand the customer’s needs.

Customer at the centre

Agile suits this philosophy, putting the customer at the centre and getting faster feedback in order to deliver more of what they need and want. From that will come revenue, profit and shareholder happiness.

Exemplar teams are giving us real data that’s seeing twice as many work items getting cleared up in half the time at half the cost, with 70% fewer incidents. We’re seeing compelling data for “better value, faster, safer, happier” outcomes. But you’re never done. There’s no end date to this: it’s about being the best at being better and it’s a never-ending journey.

Cerner and the SDLC

How Barclays Balance Speed vs. Control in DevOps